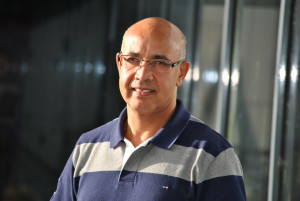 Ali Khenchaf received the Ph.D. degree at the University of Nantes, France in 1992, on the subject ''Contribution of high resolution methods to the analysis of the parameters of obstacles illuminated by an electromagnetic wave''. Then, Mr. Khenchaf was a lecturer at the Ecole Polytechnique of the University of Nantes and a researcher first at the SEI laboratory and then at the IRCCyN laboratory (UMR CNRS 6597). In 2000, he obtained his "Habilitation à Diriger les Recherches" on the theme "Electromagnetic Modeling, Bistatic Radar and Information Processing".

He is currently a Full Professor at ENSTA Bretagne where he directed the E3I2 laboratory (EA3876) from September 2001 to December 2011. And he contributed to the drafting, upon submission of the file and then Co-leader of axis 1 (Maritime safety and security) of the “Mer Bretagne Atlantique” competitiveness cluster (2005-2010).

Since January 2012, he joined the Lab-STICC UMR CNRS 6285 where he was from 2012 to 2020, head of PIM (Propagation and Multi-scale Interaction) team and since 2021, he is head of SyPH (Photonic Systems and Microwaves) department.

His research interests include the following areas:

-Propagation and interaction of EM waves (including in random environments, example of the maritime environment, …)

He is the author or co-author of more than 380 scientific articles in international journals and conferences.

He has assumed responsibility for more than 56 scientific projects contracted in partnership with industry and state organizations.

He is a member of the “Editorial Board” of three international journals (Remote Sensing, Sensors and European journal of Remote Sensing).

He is an Expert with several agencies and organizations in France and abroad.