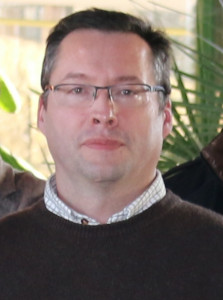 From 2000 to 2001, he was Assistant Professor with Polytech-Nantes, the engineering school of the University of Nantes, France.

Since September 2001, he has worked with the University of Brest, France, as an Associate Professor in electronic engineering and Signal Processing.

His general interests lie in the area of signal processing and digital communications.

From 2007 to 2012, he was assistant manager of the Signal Processing Team, within the Laboratory for Science and Technologies of Information, Communication and Knowledge (Lab-STICC - UMR CNRS 6285).

From 2012 to 2020, he is the manager of the Defense Research Axis, within the COM Team of the Lab-STICC. He received his Habilitation to Supervise Research (HDR) from the University of Brest in 2013 presenting an overview of his post-doctoral scientific research activities on the development of "self-configuring multi-standard adaptive receivers : Blind analysis of digital transmissions for military communications and Cognitive Radio".

Since 2018, he is the holder of the "CyberIoT" Chair of Excellence.

Since 2020, he is the SI3 Team leader, within the T2I3 research Departement of the Lab-STICC.