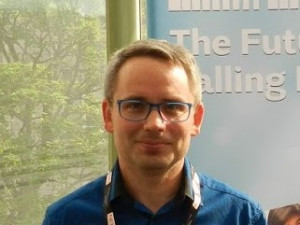 Mihai Telescu received a Doctorate in Electronics from the University of Brest, France in 2007, he was a post doc researcher with the EMC Group at the Politecnico di Torino, Italy between 2008 and 2009. He has been an Associate Professor with the UBO ever since.

His research interests include linear and non-linear macromodeling, model order reduction, system identification, CAD and related topics. Most of his projects revolve around the idea of providing accurate Inout/Output mathematical descriptions of systems and enabling fast simulation. These issues are crucial in signal integrity for example where smart surrogate models are used for both channels (interconnects) and buffers.

Since 2015 he is also conducting research in telecommunications with a focus on the design of non-linear predistorters. Predistorter design basically amounts to an inverse system identification problem where the aim is to compensate the nonlinear behavior of a channel.

Mihai Telescu chaired the 22nd and the 23rd editions of the IEEE Workshop on Signal and Power Integrity in Brest and respectively, in Chambery. He is an associate editor at IEEE Transactions on Components, Packaging and Manufacturing Technology in charge of a special section titled “Packaging and Interconnects: cutting-edge solutions in modeling, design and characterization”.