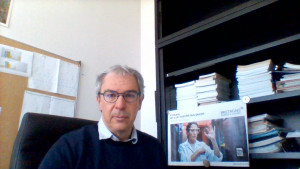 Thierry Le Gouguec received the Ph.D. degree in electrical engineering from the University of Brest, Brest, France in 1994 and the French “Habilitation à Diriger des Recherches” in 2016. Since 1995 he has been Assistant Professor at the University of Brest. He is actually the director of the mechanical department of the faculty of sciences of Brest where he is teaching the electronic, electro-technical and automation. He conducts research at the Laboratory Lab-STICC which is affiliated with the French National Science Research Center (CNRS). His work interests are new interconnects for network on chip and in particular wireless interconnect network on chips (WINOC). In this context, he has been the head of “BBC” project funded by French labels CominLabs. In addition, his research interests include Electromagnetic Compatibility (EmC), the interconnect characterization, the new RF and wireless interconnect concepts for Inter-chips communications and the small printed antennas. He also works on special antenna arrays as ESPAR or sparse arrays and on additive manufacturing for RF components.